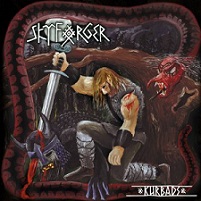 Since they have the capacity to choose just about any Pagan/epic/folk metal band, Metal Blade could have done a lot worse than Latvia’s Skyforger. After building a strong reputation while on Paragon Records, the long-running quintet look to make their first significant international dent with Kurbads. Give nods to the band for this: they’re awfully adept at not falling to the conventional trappings of this style, making Kurbads a left-field choice for the denizens of all things epic.

Traditional folk instrumentation peppers the better part of this 11-song effort, but it’s the band’s decided thrash edge that gives Kurbads a bit more in the meat and potatoes area. “The Nine-Headed,” “The Devilslayer” and “The Black Rider” are best examples of this, rallying nimble riff-action with singer Pēteris Kvetkovskis’s hearty yelp. In fact, there’s a nice degree of variation here, as songs alternate from thrashy, to epic, to typical beer-clanking sing-a-longs.

Additional highlights include “The Bewitched,” a song that wouldn’t be out of place on a Thyrfing album (perhaps the band Skyforger is most akin to), and “Song of the Mare” which if you aren’t paying careful attention, runs like a folkified version of Dio’s Holy Diver.” “In the Underworld” and “The Last Battle” gradually settle the album down into gentle, more restrained territory that brings out the absolute texture in the band’s sound.

In what is one of the nicer success stories in the underground, Skyforger have paid their dues and have reaped the rewards. Considering they were one of the first to kick around with folk dynamics in metal, it’s only fitting Kurbads will be exposed to a larger audience. The distinction between them and the 8 million other bands of this ilk might be hard to differentiate at this point, like we said earlier: you could do a lot worse than Skyforger. A lot worse.