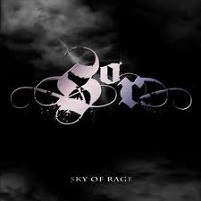 What should a musician do when he has more ideas than his main act can handle? In the case of Astral Doors guitarist Joachim Nordllund, you pull together another band that includes a former member of Astral Doors (bassist Mika Itaranta) and call it Sky of Rage. The quintet also includes guitarist Jan Cederlund, drummer Tomas Friberg and vocalist Staffan Carlsson- and three years after their development, we have the debut self-titled record to enjoy.

As far as style, Sky of Rage definitely has a heavier edge than Astral Doors 70’s-inspired Rainbow roots – songs like “Stardust” and the title track have more of a spirited modern stomp, reminding me of Tony Martin –era Black Sabbath, Jake E. Lee led Badlands and possibly a touch of latter day Nocturnal Rites. Staffan Carlsson has a killer voice, comfortable across all ranges of the melodic metal spectrum, injecting the right amount of personality and charm, bluesy and warm on “Reclaim Your Rights” while holding out the confident high notes on the more sinister “Shape of a Giant.”

Nordllund and Cenderlund wield a potent double guitar drive throughout these 11 songs, peeling off riffs and solos that seem part and parcel of every Swedish axe man’s bag of tricks; melodic, fluid, and meaty all the same. Self-produced at Nordllund’s Big Time Studio, he let former Astral Doors guitarist Martin Haglund handle the mixing process and Sky of Rage surely benefit from a raw, in-your-face power to this material.

This seems tailor made for appreciation in native European and Far Eastern nations, but I do know a few people who miss this melodic, guitar hero-oriented metal in our part of North America. Must be something in the water, because this is another gem from Sweden…maybe they could come over and teach the younger musicians of North America a thing or two about metal’s ideals?