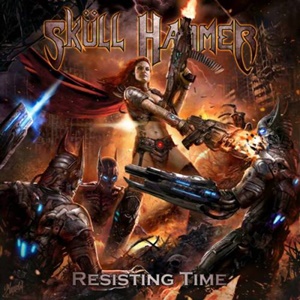 New England thrash has been an institution since the 1980’s – Wargasm and Meliah Rage gaining label deals, even as tides shifted and other genres caught fire. Vocalist/guitarist Steve ‘Ace’ McArdle has been holding that thrash flag high for Massachusetts trio Sküll Hammer since 2007, going through the normal lineup shuffles and growth necessary as they establish a presence in the scene. Previously recording an EP Fear the Truth (2008) and full-length Pay It in Blood (2010), Steve also was the vocalist for Seax during 2013-2015, appearing on their second album To the Grave, which properly explains the eight-year gap between recordings for Sküll Hammer.

Resisting Time seems quite a prophetic album title, as the nine songs embrace that old school philosophy to the genre – be it the gang-oriented melodies that often mirror the musical movements, straight-forward riffing that contains the NWOBHM spirit against machine gun snare/double kick work, or that down to earth, blue collar trio spirit of musicians who generate passion from their youthful discoveries in thrash. Steve whirls his word spew in a Tank/Wargasm-like barking fashion, working brilliantly in a militant discourse for “Octane in My Veins” (love the half-time Metallica-ish breakdown during the instrumental section). The rhythm section of bassist Glen Reed and drummer Chris Gervais provides patented thrash principles while injecting a bit of traditional/groove feel to the proceedings, providing that necessary headbanging drive to “Under the Witches Spell” and first single “Nomads of the Wasteland” that keeps Priest/Maiden aesthetics on hand to obvious Bay Area meets Mercyful Fate-ish textures. And how can you go wrong with an ode to heavy metal lyrically on “Decibel Addiction” – the music similar to early 90’s Megadeth although the solo leans towards Hammett-esque wah wah action.

The predictability can be a hindrance to some, as most well versed in the genre will feel many of the transitions take on a similar heads-down crunch/ traditional / back to crunch framework. This scribe attributes these aspects to again a love of early NWOBHM, where melody was as important a factor as being aggressive or energetic – and this record contains plenty of hooks to slam or wave your studded wrist bands high in the sky for. Tack on a futuristic, blitzkrieg cover and know that Sküll Hammer deliver old school thrash that young and old can treasure here. 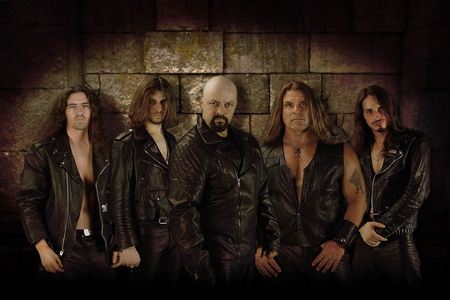