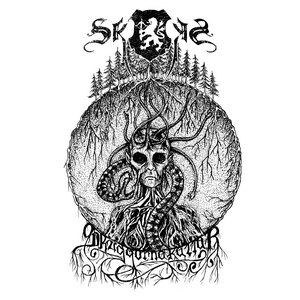 Sweden’s Skogen have been up to their brand of folky, atmospheric black metal for a while now, introducing little enhancements ever along the way. Reaching their now fifth album, Skuggorna Kallar, one could also use the doom moniker to aid in the band’s description. With the minimalist cover art in hand, it still manages to convey what the listener is about to get into – bleak and forest-y material for certain.

On the one hand, Skogen are absolutely successful in generating an environment that embraces the woodsy nature of their name. It’s slightly eerie, significantly gloomy, and entices you in with some additional instruments that bring a feeling of authenticity without going too far over the top or ‘trying too hard.’ The combination of this atmospheric black metal vibe with some melodeath influences, complete with heavier and mellow moments will capture you when it is at its best. “Frostlands” is a potent mixture of black/death/doom with rich melodies that have a haunting tone that is sure to stick with you after it’s over. Unfortunately, it’s also followed up by arguably the album’s weakest moment, “The Suns Blood.” The off-key clean vocals here reach the point of cringing, to the point of pulling you completely out of the world they have tried so hard to bring you into. It’s odd that something done so well in the previous track becomes such an odd piece the very next song. There’s some more mild inconsistencies with this in other tracks (“Beneath the Trees”), and it’s not album-breaking as a whole, but it does lead one to the sense that there’s a greater potential if these elements were used more consistently.

Skuggorna Kallar carries a strong sense of foggy mystery and gloom. While there are a few moments that you may be pulled from that particular sensation, when it works, it’s fantastic. With a greater consistency, the band would easily reach towards the top of the black metal legions.