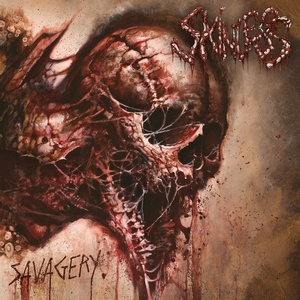 In thinking about it more deeply than what was probably required, the title to the most recent Skinless effort, Savagery, is one that is quite deserved. Savage is one of the first terms that comes to mind when discussing the veteran upstate New York act, having witnessed their violent beginnings in the local scene and then their later breakout through Relapse Records. After an impressive comeback with Only the Ruthless Remains, it’s as if the clock never stopped for the band. Savagery holds up to the band’s high standards.

Those looking for a distinct level of evolution aren’t really going to find it here with Savagery. This album is really just Skinless doing what they have always done best. Brutal, groovy riffs are the star of each track, which have a steamroller effect on the listener. The monstrous tone and energy is enough to knock you backwards with its onslaught, and while they aren’t the most overly technical riffs, they do have enough catchiness to them (despite all the carnage) that you are bound to move to the music. There’s just something about the grittiness of the sound of Skinless – it’s dark and doomy, but the energy is there, and the heavy riffs and menacing growls give off the right combination of brutality and accessibility. Dare it be said, the one thing that could be viewed as a progression is that of the songwriting. There are some longer tracks (at least for more brutal death metal), and here you can find some rather striking leadwork and melodies. While it may seem odd to call it a maturation, there’s definitely something tighter about the songwriting.

After the pleasant surprise of the band’s reformation and call to arms with Only the Ruthless Remain, Savagery solidifies Skinless as continued leaders of extreme metal. With today’s emphasis on being the fastest, most technical band around, it’s nice to see that there’s still a place for bands that choose songwriting over sheer ‘wow factor.’ Savagery instead revels in violence and carnage, which is what extreme metal fans truly crave at the end of the day.