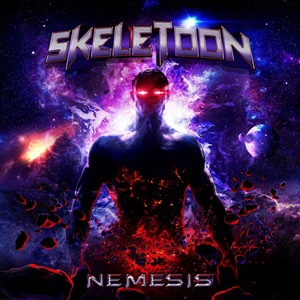 Releasing their fourth studio album in five years, SkeleToon embrace a healthy creative spurt and hard work ethic in a time when often most power metal acts take two to four years between releases. Already impressing this scribe with their nerd/happy metal blend with loads of European influences (especially on the German end a la Helloween, Gamma Ray, and Freedom Call) for the two previous efforts Ticking Clock and They Never Say Die, Nemesis continues to strive for superior, uplifting vocal melodies and captivating speed-oriented power chords along with bombastic rhythm section / choir activities that will remind most of those glorious mid-80’s to late 90’s highlight reel moments for the genre.

It’s a given that the best power metal albums rely on specific energetic cuts to set the stage, then delve into those dynamic mid-tempo or ballad efforts before returning to the cherry-picked vocal and musical melodies that gain favor with the hordes at their favorite summer festivals. It’s hard not to think of a more controlled Dragonforce as the guitar lines weave and bob against the rapid fire double kick/high octane drumming for “Brighter Than 1000 Suns”, while the follow up “Will You Save All?” has equally engaging upper register vocals from Tomi Fooler as well as guest Alessandro Conti that push this track into classic Labyrinth meets Gamma Ray territory. Adding a bluesy lead break to “Cold the Night” sets up a slow-building, tender ballad, the piano accents from Alessio Lucatti perfect against the restrained power chord movements of guitarists Andrea Cappellari and Davide Piletto. Throwing in an Italian-sung number for “Il Tramonto Delle Ere” with some classical harmonization showcases SkeleToon taking equal inspiration from inside and outside the metal landscape, Tomi reaching Kiske/Lione-like falsetto charm, with a bit of a Freedom Call-like choir on equal footing to bring the activities to a back half album highlight. And how can you not smile at a track called “The NerdMetal Superheroes” – while the Stan-W Decker cover art could be poster board material for those who appreciate a sci-fi illustrative, comic feel coming to life.

The bonus cover of Angra with “Carry On” is a bold choice – the late André Matos a superstar in his own right, beyond the musicians of that Brazilian outfit. They did a solid job in keeping the Helloween-esque track in line with its original intent – the solos superb, the bass spotlight in the early proceedings sharp, and the feel aligned with SkeleToon’s passion for uplifting power metal. We all need some feel good records in our lives, and that’s where Nemesis’ strengths lie to clear any grey skies to blue if you need that pick me up. 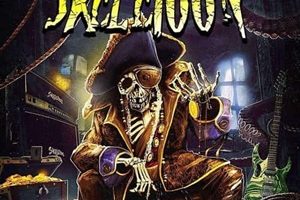 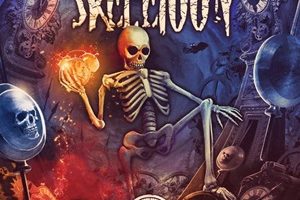