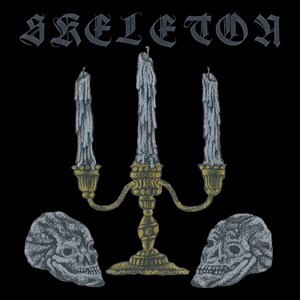 “Revisit the past, foresee the future”

I don’t remember who mentioned that axiom to me, but it sure seems applicable to Austin upstarts Skeleton. Their eponymous debut from 20 Buck Spin sounds anything but, as a cursory listen to the album gives off the feeling that the band just released a Greatest Riffs Collection and played the hell out of them.

Skeleton’s opening salvo is a title track that’s out for blood, the riffs exacting, the drums beating you senseless but still you beg for more. “Mark of Death” ups the ante with breakneck speeds, and you’re left in ruin as the album blazes through “Ring of Fire”. There is not a single moment on this album that can make listeners’ attention wander elsewhere, thanks to Skeleton’s penchant for just writing direct and punchy songs that grab you by the shirt and never let go. “Catacombs” ends the album with one of the best black metal-tinged songs you’re going to hear this year.

Debut albums can sometimes be a demonstration of a band’s growing pains but with Skeleton, they seem to do away with it completely, as they deliver one of the most fleshed-out and fulfilling metal releases this year.