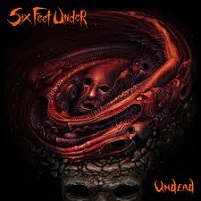 There couldn’t be a bigger gap between Cannibal Corpse and Six Feet Under at the present time, both in terms of popularity and overall death metal execution. While CC has plotted virtually the same course since Chris Barnes jumped ship in 1995, Six Feet Under has tried its hand at shuffling in various guest singers (see: the regrettable Ice T vocal spot on 2001’s True Carnage), numerous cover albums, and various live albums, all sandwiched between studio output that was spotty at best. With a revamped lineup and altered focus in tow, Undead sees SFU trying to make up for lost time.

The addition of drum nomad Kevin Talley (Dying Fetus, Misery Index, Chimaira, etc.) and ex-Chimaira guitarist Rob Arnold instantly gives the band a jolt in the sonic spectrum. The simplistic, chug-and-slug death metal is still en vogue with SFU, but there’s an ominous and more groove-oriented hue that is brought to the fore on opener “Frozen At the Moment of Death” and the excellent “Formaldehyde.” And unlike Cannibal Corpse, Barnes and co. prefer to dole out mostly mid-tempo romps, some of which are as churning as anything the band has done, such as “Blood On My Hands” and album highlight “Reckless.”

Naturally, Barnes’ stamp is all over this thing. Unlike previous outings, his vocals aren’t thrust too high in the mix (see: 2003’s poorly-mixed Bringer of Blood), allowing his cadre of gurgles, grunts, and vocal manifestations to have more bang for their buck. For his more choice moments, refer to “Near Death Experience,” and “The Scar,” which recalls some of the man’s more furrowed and gruesome barks ala The Bleeding.

Alongside modern day Morbid Angel, Six Feet Under takes the cake as the most polarizing act in death metal. Obviously, there are far more extreme and exciting options out there, but on Undead, Six Feet Under gives meat-and-potatoes death metal a nice kick in the behind. And like 2008’s very-underrated Death Rituals, it showcases a kind of quality control that just wasn’t there when the band was virtually spitting an album out once a year. 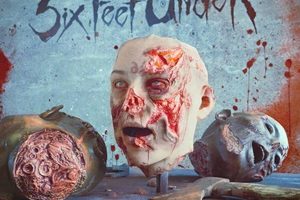