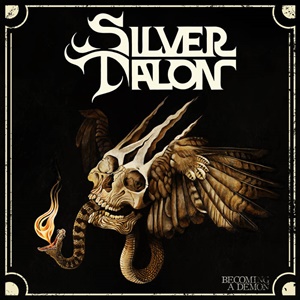 Forming out of the demise of Spellcaster (who issued three heavy/speed metal albums, the last of which Night Hides the World appeared in 2016 on Prosthetic Records), Oregon act Silver Talon contains three ex-members, along with vocalist Wyatt Howell who sang for Sanctifyre. Aiming to keep the fire alive for heavy metal, Becoming a Demon is a solid eight song salvo for those who love mid 80’s power/ heavy metal US style with occasional nods to Teutonic finesse. In other words, these gentlemen rear back and let the riffs fly, giving plenty of axe action to study – while not forgetting about keys like harmonies, melodies, and hooks amidst the crunchy tones on display.

Sebastian Silva and Bryce Adams Vanhoosen supply the guitar attack, deftly volleying from Sanctuary/Nevermore-ish type affairs like “Devil Machine” and then striding valiantly into Savatage/Queensrÿche-oriented outings such as “Silver Talon” – while the double kick and free flowing fills from drummer Colin Vranizan up the energy and progressive/extreme propulsion factor to this material. Wyatt’s range and ability to sustain upper register notes will obviously draw comparisons to singers like Midnight of Crimson Glory as well as Rob Halford and Warrel Dane in their prime – some of his more emotionally resonant work evident during “Cold Embrace”. Tackling the classic “Battle Angels” of Sanctuary, the band add the expertise of Jeff Loomis for lead break guest activities – the Silver Talon version possessing more crunch and less Mustaine-reverb proclivities, perfect for what the group wants to achieve in that ‘united’ front for all within heavy/power metal. If there is a disappointment to be had, it’s that taking away the short intro and outro, you get a six song EP when this scribe would be very satisfied with a full-length outing based on the talent, playing abilities, and solid songwriting mechanics already present.

With the goal of taking what Spellcaster did previously and marching it up to 11, Silver Talon has achieved what they set out to do here. It’s in that sweet spot of US metal that has plenty of heaviness while being musically sharp, sophisticated, and awe-inspiring.