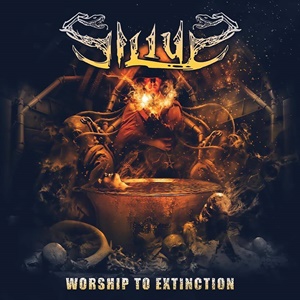 Moving from Massacre to Rock of Angels Records for album two, Austrian thrash band Silius return with Worship to Extinction, determined to prove that their brand of modern groove-oriented meets traditional thrash style has staying power. Supporting their Hell Awakening debut from 2017 with appearances at Wacken Open Air and Metal Days Slovenia sharing the stages with Arch Enemy, Crowbar, Soulfly, and Obituary to name a few – the band feels the need to create a heavier effort that is more punishing in execution and attitude.

One aspect immediately noticeable to these ears is the stunted, slithering vocal delivery Matthias Thurner employs – its gritty, measured, and molds together aspects of Phil Anselmo and Charles from Morgana Lefay as you hear his low register to scream propensities during “Worship” and “Abominate”. The main structures switch up between the groove and speedier, chugging thrash angles – intertwining aspects of Exodus, Testament, and Lamb of God as songs like “Lesson in Blood” and “Evil Inside” bleed for the cause with addictive riffs, rumbling bass, and solid/fluid drumming twists and turns. There are hooks that make bruising marks on your brain and body – the type where bodies launch in circles or stagediving spontaneously occurs, of which “Tripping Balls Out” seems destined for Silius setlist permanency. Although most of the songs are in that tight three to four-minute sweet spot, closer “Drowning” at 6:13 is a semi-ballad departure, Matthias stretching out his voice in clean measures while the southern/bluesy-oriented riffs and introspective instrumental segments offer a broader paint stroke to the band’s abilities as musicians. You can tell throughout these eleven tracks that Silius are gaining more confidence in their approach, fluctuating between slower to mid-tempo groove-laden passages and the balls to the wall thrash activities sure to charge up metal followers globally.

It’s never an easy proposition to align two styles of metal into one, but Worship to Extinction succeeds because it never panders to the lowest common denominator to achieve the final goal of heaviness and distinctive songwriting with a boatload of catchy hooks on both the vocal and musical fronts. Glad to see more European bands taking an interest in this fusion, as the results can be quite addictive and fruitful.