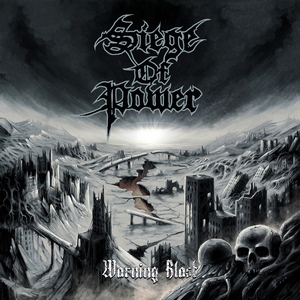 No doubt the extreme metal legions will be heeding the call of Siege of Power’s Warning Blast, as the line-up for said explosion is nothing short of a veteran’s dream. Consisting of Chris Reifert (Autopsy) on vocals, Paul Baayens and Bob Bagchus of Asphyx on guitar and drums, and rounded out by Theo van Eekelen (Hail of Bullets) on bass, there’s a lot to love. But with such a line-up, expectations drive high and Warning Blast fails a bit short in that regard.

Those expecting a straight-up death metal venture should be cautioned, though it’s far from a bad thing. There’s certainly a deathly edge to Warning Blast, but it’s just as rooted in everything from crust to hardcore/punk to thrash. Therefore you can expect some really high energy numbers that absolutely scorch the ground with speed and aggression. “Uglification” and “Privileged Prick” are exactly what you would expect in that direction. Volatile and angry, but thankfully the entire album isn’t simply a steamroller. “The Cold Room,” the title track, and “Escalation Til Extermination” provide some necessary slowdowns at the right time, even if they do feel a bit disjointed from the other cuts. Ultimately, the most damning part of Siege of Power is that it feels more like a collection of parts rather than songs. The songs contain some real raging riffs, without question, but at the end of the day, with 18 cuts (with two bonus tracks) at 46-minutes, outside of the doomier numbers, there’s not much that really stands out. Reifert’s vocals are gold (check out “Lost and Insane”), and it’s really not for lack of trying, but more often than not, there is a standout riff instead of a standout song.

Considering the talent backing Siege of Power, it’s hard not to wish for something a bit more. The crossover vibe is strong and enjoyable (and thoroughly pissed off), but with tracks that have more ‘moments’ than all out madness and enjoyability, it makes it a bit hard to keep returning to once the anger has subsided.