Getting really heavy here, and not in some stacked-half-stack sort of way where the volume can break the sound barrier. No, Oregonian troupe Shroud of the Heretic (could have sworn they were at least British based on initial listens) play the sort of heading-for-the-abyss type of death metal that has been quasi-popularized by the likes of Lie in Ruins and Abyssal. Whereas most death metal bands set out to batter with brutality, these bands do it with weary riffs, lurching tempos, and bellows that would instantly wake Cthulhu from slumber. Essentially, it’s par for the course on Revelations in Alchemy.

Obvious limitations with this sound aside (and there are a lot, but let’s keep it positive), the band’s occasional flirtation with the extreme on opener “The Arrival” is an instant head-turner, thus setting the table for various moments of variety. Granted, unearthing such opportunities take their good ‘ole time to develop, but in the process, the warped riffing of “Heretical Screams,” ungodly bass tone thrusts on “Illusionism,” and the surprisingly nimble, yet engaging closer “Blasphemous Rebirth” manage to pique interest.

If looked at upon for simply a sonic perspective, then few bands are able to shake the walls the way Shroud of the Heretic can. The way in which the band’s riffs rumble and clash isn’t by luck or studio trickery; there’s some serious attention devoted to being unbelievably heavy, something the band can lay claim to as Revelations in Alchemy starts making the rounds. 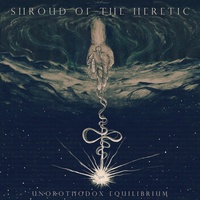