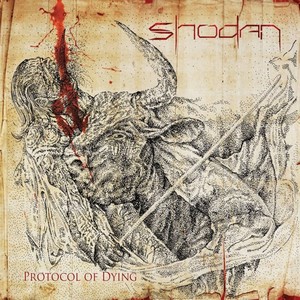 When checking out a plethora of new material on a constant basis, it gets to the point where many a band’s formula becomes predictable and stale. It’s always nice to hear those attempts to go outside of the box, even if the formula uses some familiar set-pieces. Shodan’s first full-length effort, Protocol of Dying, is one such attempt at maneuvering material in a way that gives much-used elements a fresh coat of paint.

When lead-off “Shrine” begins, you may be tempted to paint the band into a modern death metal template, with it’s focus on frantic and aggressive riffing, blastbeats, and barked vocals. But don’t be so quick to paint the band into a corner, because by the time that “This World Means Nothing” rolls in, you’ll begin to see the band in a much more diverse light. Taking modern elements, groove, thrash, and more into their modern death metal template, it starts to leave you guessing where the band will go next (in a good way of course). The afore-mentioned track uses some atmosphere and thrash-based riffing to veer into new waters, and the trend continues with the soft interlude of “No Dignity,” melodic leanings of “Nails,” and groove-laden title track. The band isn’t above using a plethora of vocal styles from a few moments of clean singing to shouts to growls to accent when necessary, some light synths, technical riffs, or just deciding to go balls to the wall with brutality if the song calls for it. What’s most important though, is that with all of the band’s methods, they have a cohesive product in the end. There’s plenty of variety, but you aren’t going to feel like you are hearing a different band with each track as it all comes back to that modern death metal framework that weaves into their sound.

An impressive debut that provides a much-needed tweaking of some usual elements, Protocol of Dying is much more than it might initially appear. Plenty to enjoy for the death metal fanatic, with much potential to be observed as the band marches forward.