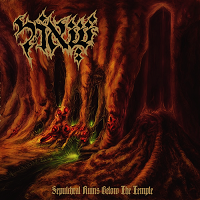 Translated from Hebrew, Sheol is a two man group from the UK consisting of A.B.S. (vocals, guitar, bass) and A.H.S. (drums, guitar).  Sepulchral Ruins Below the Temple is the band’s first offering, a 6-track EP featuring five songs and a cover of Darkthrone’s “Cromlech.” Sheol play old-school death metal, by way of bands such as Dismember and Autopsy, with some Grave Miasma and Incantation thrown in for good measure.  Most of the time, Sheol is bulldozing away with ferocious riffing but occasionally slow things down nicely into further dark and evil riff territory, such as on “Perpetual Descent into She’ol.”  There is even an intriguing, sinister instrumental track (“Katachthomb”) that feels more evil and inspired than many of the same variety.

While there is a definite potential to what Sheol is offering on their debut, there are two huge problems that are hard to look past.  The first, and hardest to swallow, is the drumming.  Sometimes the drumming is dead on, other times, it feels as if the drumming is meant for a different track, and even a casual listener is bound to notice the awkward contrast that it produces (see the “Cromlech” cover for an example of this).  This is even more problematic because the drums are pretty high in the mix.  Which brings us to the second problem, the production is abysmal and not in a good way.  Sure, we get it.  It’s dark, grimy, filthy death metal and a clean production is just not going to work, but the buzz saw guitars seem so thick and muddled that it occasionally seems like nothing but a flat wall of noise and the riffing is barely discernable.

While Sheol’s debut may come across as unimpressive, there are elements of greatness buried beneath.  With some aesthetic fixes, they should be able to remedy the problems they face here and provide us with something more palatable by their next release.