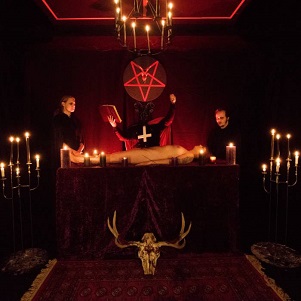 All sorts of obfuscation here, from the album cover that appears better suited for an occult rock LP, to even the “Shadowmaster” name itself, which comes across like a sword-wielding power metal outfit, not a Swedish sludge unit. And that’s how it goes with Shadowmaster’s self-titled debut, a rather dull, lackluster foray that shows just how far a band can take utterly bland riffs in the sludge/doom sphere.

Parlaying the usual tandem of amplifier overdrive and burly, unintelligible vocals, Shadowmaster manage to make this thing go beyond an hour, which, if you’re interested in the aforementioned cadre of one-string riffs, then have at it. It’s an oft-repeated formula: Play things at half-time, tune low, drop down, and work up enough of a sonic lather to call it a song. The thing is, few, if any of the cuts here have any traction; it’s like you’re actually swimming (or drowning) in sludge, which for all intents and purposes, could be the Swedes’ actual approach. Nevertheless, you’ve got nothing else to do other than to limp to the finish line when “Under His Black Skies” comes calling. It’s a real test of endurance to get there, mind you.

The sludge doom bands worth their salt (or being, for that matter) understand that at least some dynamics will head off the above complaints. Shadowmaster have none of that. Unfortunately, this is starter-kit sludge doom with little to reckon with.