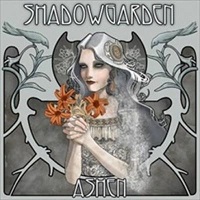 It could be the case that within every black-shrouded Goth metal dude/chick, there’s a commercial

, radio-friendly side waiting to burst out. For Draconian’s Andreas Hindenas and Johan Ericsson, Shadowgarden is the vehicle to convey that side, ‘cause it’s not happening in their main act’s dour and dreadful world. That being said, Ashen is very much a commercialized Goth metal album, which in itself, is hardly a bad thing at all.

Recalling To/Die/For and Sentenced’s lighter moments (think of aFrozen/Crimson cross), Shadowgarden’s Goth concoction relies solely on song construction and strong hooks, and there’s a wealth of that going around. “Last Summer” is an immediate jam, most notably in the chorus, as is “With Love And A Bullet,” which features a vocal spot from Draconian’s Lisa Johannson, who sounds very much at home here. In fact, Johansson sounds better suited vocally for some of these songs than Ericsson does, who on certain spots, fails to sound convincing.

Additional songs of note include “140 AM,” and “Murky Waters,” a number that is perhaps the most Goth-sounding thing here, with Ericsson taking on a more baritone tone of his voice. “Way Down Low” pops out an array of shimmering guitar chords and melodies, while album closer “Slowmotion Apocalypse” emerges as the true highlight here, perhaps the only song that rivals Hindenas and Ericsson’s main act. Seriously, this jam crawls and cripples like some of Draconian’s prime work…an excellent way to close the album.

Ashen is an album that states its intentions right from the get-go, so swallowing the oft-playful and romantic vibe of this thing isn’t all that difficult. There’s always, always, a spot for top-notch songwriting and the caress of a good Goth metal hook. While Ashen is nowhere near the brilliance of Sentenced or even Cemetary (another reference point), it’s evident that Shadowgarden are effectively holding that (black) flame high.