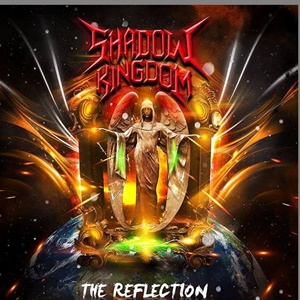 Hailing from the Milford, CT area, Shadow Kingdom has been a part of the local metal scene off and on for quite a few years. Given the chance to open for acts like Fates Warning and Metal Church while also playing out locally when they can, they finally have assembled a series of recordings through the years to release The Reflection – an eight-song odyssey into their take on power/traditional metal with occasional thrash and progressive nods. After a few spins it’s quite obvious that these gentlemen live for an old school attitude and songwriting philosophy – very akin to what you could expect from many US power metal artists during the mid to late 1980’s.

“Pain the Motivation” opens with a presidential-oriented speech before the military-style snare hits and infectious guitar lick builds up momentum, the main riffs coming off in a power doom montage a la older Morgana Lefay meets Savatage. The dual guitar runs within “Rise” possess some Maiden/ “Two Minutes to Midnight” flavoring, the drumming moving into some interesting speedy fill sequences before reverting back to a slower, progressive-like tempo – vocalist Robert Slater gliding up and down his naturally melodic register in the vein of Rob Halford, James Rivera, and others in that ilk. You can expect thoughtful lead breaks too – not necessarily too wild but accentuating the atmosphere and crux of musical ideas on display. At times the rhythm section even gets a chance to spread their wings – the bass play for “Fools of Empty” giving this crunchy power number an extra energy uplift.

Because not all of this material comes from one specific recording session, listeners will probably tell very quickly that the production and tones can fluctuate from track to track. It’s not that you can’t hear most of what’s going on, but there is a distant, compressed quality that you wish could have possibly improved in a couple of areas that makes it easy to distinguish the drum/guitar sounds for “Trouble” versus “Sorrow” for comparison’s sake. Shadow Kingdom definitely appeals to the 35 and over market because of their older influences and method of songwriting – so if names like Metal Church, Powersurge, and Morgana Lefay mean something to you, this could be another find for your collection.