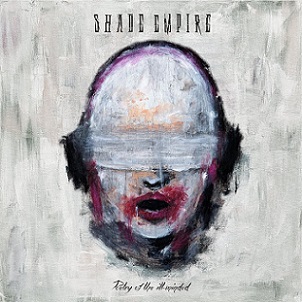 Part-orchestral pomp, other part finely-tuned melodic death metal, Finland’s Shade Empire employ the sort of cinematic sprawl that makes them sound, for lack of a better term, larger than life. You get the same idea from Wintersun, although Wintersun can be a little ponderous. Shade Empire, on the other hand, offer up songs that are swift and direct, the orchestra bits working one side while pointy shards of straight-ahead melo-death do their thing. On their fifth full-length Poetry Of The Ill-Minded, Shade Empire provide a glimpse into their dramatic, shape-shifting world.

The man behind the orchestration and smart keyboard interplay is Olli Savolainen. Savolainen is full-go on nearly all of the seven tunes here, providing the highlight-reel moment at the drop of a hat, whether it’s the threatening tones kicked out on “Wanderer” or the adventurous, if not heroic rumblings on “Thy Scent.” It’s a different back-and-forth to work through, as Savolainen has enough good sense to butt out on the times when the actual metal needs its space, like on opener “Lector (Welcome).” By and large, though, these cuts are massive heaves of intense, spiraling grand metal, none of which fornicates toward folk realms.

The simply towering “Anti-life Saviour” is when Poetry Of The Ill-Minded eventually reaches its dramatic peak, a largely theatrical journey that would be the sort of thing John Williams would take on if he were Finnish and was raised on Gothenburg death metal. Shade Empire are, as you can surmise, far more than that, really the not-so over-the-top function of larger-than-life, orchestral melodic death metal, just without the pretension. Poetry Of The Ill-Minded is an epic Finnish melodic death metal adventure du jour.