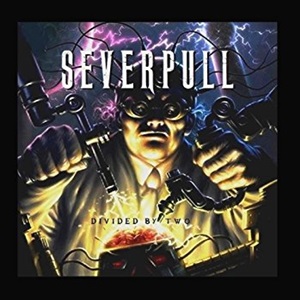 Brought to this scribe’s attention through ex-Heathen/Vicious Rumors guitarist Ira Black while posting on Facebook, Sacramento, California’s Severpull started in 2014 and after a few lineup changes (including founding drummer Ryan Shutler’s sudden heart failure death a year later) got on track to issue their debut EP entitled Divided by Two. What we have within these four cuts is a speedy brand of thrash, circling the wagons between the late 80’s/early 90’s Bay Area movement taken to the new generation who seek out unbridled energy and whirlwind mayhem.

The ferocious rhythms and relentless riff attack recalls the power and precision that put Forbidden, Heathen and Vio-lence on the map, as “Traced in Chalk” and the title track make hairs stand up on end, Tom Jimenez and Jonny Munoz waging war through fleet fingers and hand motions that would sprain and injury newbies attempting to play these guitar parts for the band. Uppity thrash can often become monotonous in certain musicians’ hands – not the case with Severpull, as they inject the mostly up-tempo offerings with occasional mid-paced nuances and swirling effects that convey ultimate power and promote mandatory pit propulsion. Check out the beginning passages or lead break of “Lasting Impression” to know that Severpull remember that melody and recurring thematic instrumental hooks allow for return engagements with the material. Beyond the music, the furious, rapid word spew delivery from vocalist Paul Laughlin straddles the work of Vio-lence’s Sean Killian and Bob Mayo of the severely underrated Wargasm – it’s a wonder he doesn’t trip into the studio or on stage having to lob out the hundreds of words in these four songs.

Severpull pack adventurous, potent riffing, steady rhythm section changes, and killer vocals into strong four-five minute and change arrangements. Divided by Two excels in the Heathen/Vio-lence style where power and semi-technical thrash ruled the landscape, and is an excellent release for those who crave something different than another Exodus/Testament wannabe on the current landscape.