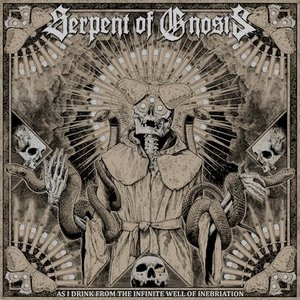 Pooling together some collective resources from Job for a Cowboy and The Black Dahlia (and including some previous intermingling between some of them in Goratory) means that many will be quick to check out Serpent of Gnosis based on name checks alone. Some high expectations to fill, and thankfully the band doesn’t play into them, instead delivering a first offering that sits in its own sonic space.

As I Drink from the Infinite Well of Inebriation is often fast and frantic. One could make the argument that there’s more of a grind influence to the material, and judging the short lengths (all but “Cognitivity” sit in the 1-2 minute range) of many of the tracks only seems to affirm that notion. But also with the grind influence comes the idea of straight up noise, and its here that Serpent of Gnosis do their best to avoid the well-worn road. It’s fast, it’s brutal, but with the combination of grind, death, and some blackened nods, there’s also more melody beneath the surface that you might not initially give them credit for. Whether it’s an intriguing beat from drummer Darren Cesca (whose experience shines in avoiding a simple, constant blast routine), vocalist Jony Davy’s varied repertoire of screams and growls, the pleasingly audible bass work of Max Lavelle, or snarling riff attacks of Tony Sannicandro and Al Glassman, each member is bringing something to the table that makes each track stick out.

Serpent of Gnosis’ debut works best due to the aggressive tempos that they frequently employ, yet at the same time provide some interesting backdrops. You can dig into the frenetic speeds, but there’s some notable melodies (“Harvest” and “The Colorless Capsules”) that keep it brutal and varied that are bound to reel some people in. Even though they have a pedigree of big name bands behind them, they also pull out a more unique and different sound than some may expect, but one that is thoroughly enjoyable.