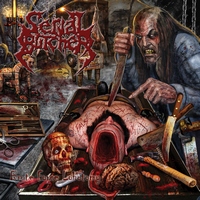 To paraphrase the band’s statement in a press release, there’s music for introspection and peaceful mediation and then there’s music that is incredibly violent. Care to guess which part Serial Butcher’s music falls into? We’ll give you the benefit of the doubt on that one and simply move on. Anyway, Brute Force Lobotomy is the band’s second full-length, following 2010’s A Crash Course in Cranial Crushing (lots of fun wordplay with that one) and it’s all but certain you can feel the brutality by these two titles alone.

Brute Force Lobotomy doesn’t do much outside of the usual brutal death metal tropes, but it performs them all with precision and masterful brutality. Fans of the good old ‘90s brutal death metal days will feel right at home with Serial Butcher’s approach and should be able to make quick comparisons to bands like Cannibal Corpse and Suffocation. The band wisely avoids imitation as the most sincere form of flattery though, and the sound is brought up to the 2015 standard. For a brutal death metal album such as this, you’d be hard-pressed to label the riffs as generic. They keep a bit more technicality in grasp, and the dynamics on a track like “Born on a Chopping Block” will show they are more than proficient at their instruments, moving from slow chugging to flat out blasting fury. The vocals do stick to the low guttural range without much variation, but they get the job done for the 41 minutes Brute Force Lobotomy offers.

While it never really veers too far off the beaten path, Brute Force Lobotomy is a solid reminder of how solid (and listenable) brutal death metal can be. More than that, it’s a fun listen that will accomplish the band’s bloody mantra and keep the listener coming back for more. Just be prepared for the onslaught.