Seputus – Man Does Not Give (PRC Music) 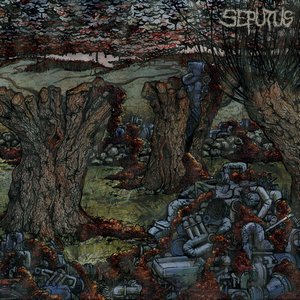 The extreme metal act Pyrrhon has been one that has been rightly garnering some praise for their more abstract and unique approach since their inception. So it was quite pleasing to hear of this new side-project featuring members Doug Moore, Steve Schwegler, and Erik Malave in a fresh act called Seputus. Originally founded in 2005 and then later re-birthed in 2013, Seputus may share similarities in members with Pyrrhon and their outside the box approach to extreme metal, but that’s where the similarities die out.

It’s hard to really put a finger on the sound of Seputus other than to just say extreme metal. There’s so many bits and pieces – ‘90s death metal, dissonant riffing, grind, noise, blackened atmosphere – one could simply go for the rest of the review in targeting specific points. But it’s not the parts of Seputus’ sound that are their defining quality, it’s how they put everything altogether. It’s cohesive, brutal, unsettling, and a bout of raw aggression that you are best to check out on your own accord. “Vestigial Tail” is one of the more frenetic tracks on the album, carrying a death metal tact while Moore’s crazed vocals take to the forefront while heavy, technical grooves swirl around him. “A Perfect Gentleman” brings a more grinding approach, where some of the longer tracks like “No Mind Will Enshrine Your Name” and “Two Great Pale Zeros” balance some crawling, doomy riffs and murky/eerie atmosphere with blistering drums, blackened death rhythms, and bizarre twists and turns to leave your jaw ajar. In fact, these longer, more adventurous tracks provide some of the album’s strongest moments in their ability to weave a longer tale.

Though you might not be able to nail everything down from second to second, it just adds to the overall twisted enjoyment of Man Does Not Give. Unique, bizarre, and sometimes creepy in tone, the abrasion factor may offput some, but those looking for the most warped that the extreme can bring forward will get some true enjoyment here.