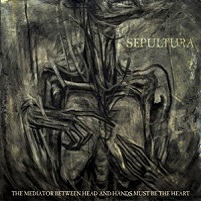 Though few bands attract as much ire as post–Max Cavalera Sepultura, denying their authenticity as a consistently unique and powerful force in the metal underground bears a significant burden of proof, one that is not diminished by the group’s latest release. While the songwriting on Mediator is not as infectious as that on 2011’s Kairos, it easily matches the intensity, without sacrificing the depth of song structure.

Like the songwriting of yesteryear, each track declares its own identity while staying rooted in the Sepultura tradition. “Trauma of War” and “Obsessed” harken to the group’s thrashiest material without sounding nostalgic, mixing equal parts Arise and Roorback, while “Manipulation of Tragedy” and “The Bliss of Ignorants” flaunt some groovy tribal percussion reminiscent of Chaos A.D. and Roots. The album isn’t all tribute to the glory days, though. The orchestral opening to “The Vatican” is more ornate and sinister than any of their previous forays into symphonic elements, and the heavily reverbed minor chords punctuating the verse riff in “Tsunami” are unsettling in a manner previously untapped.

Once again, Derrick Green shows noticeable growth in his abilities as a vocalist. Sounding absolutely ferocious throughout, he vacillates between his traditional midrange rasp and lower-register howls that seemingly threaten to disembowel the listener (and if the closing scream in “Trauma of War” is unaided by any studio effects, he deserves a medal). His mournful wailing on the slow, melodic “Grief,” however, exhibits even more of the dynamic range he is capable of. Matching Green in the performance realm is new drummer Eloy Casagrande, who enters the fold with authority by putting down more intricate beats than Sepultura has used in some time, and through the judicious application of blast beats, he adds a new level of unpredictability and malicious battery to the band’s repertoire.

Though Mediator is not a flawless release (“Impending Doom” drones a bit) and may not surpass the most recent offerings of the post-Cavalera epoch, it certainly holds its own and showcases enough new ideas to let listeners know that Sep is nowhere near tapping out just yet. Definitely recommended.