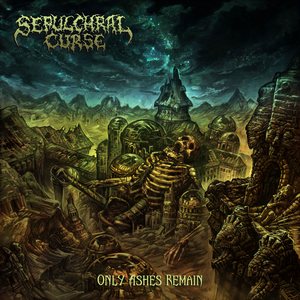 Sepulchral Curse has been propagating old school Finnish death metal for two EPs in the past, and Only Ashes Remains marks the band’s first full-length. While the act may not have much behind them, two members also sit in the ranks of Solothus (who also released a killer death/doom album this year). As you can expect, there’s some gloomy melodies in the band’s otherwise crunchy and oppressive assault.

You won’t find too much that really deviates from this norm on this one, but the clear emphasis on the melodies within make it worth checking out. With tracks that stick to the lengthier side of things, including the gargantuan 11-minute “Maan Tuhkien Uneen,” the melodies simply need to be in there to keep the music driving forward so that it doesn’t turn to musical mush. Even on the album’s shortest cut, “Church of Loss,” they find a way to infiltrate the otherwise bludgeoning track, as the second half sees things slow down considerably and emphasizes some eerie and soulcrushing riffwork. The band can come in like a battering ram, such as on “Swarming Blackness,” but there are still some tempo change-ups (and an ear-popping melody later on) that gives the track a decided edge. The longer tracks tend to use more tempo changes and keep a keener ear on the melodies, while sometimes diving into more doomy waters, such as on the aforementioned “Maan Tuhkien Uneen” as well as “Into the Depths Unknown.” Also worth noting is the sound of the album, which places it within the old school mentality with a nice degree of murkiness, but still crisp enough for the melodies to do their job.

Only Ashes Remain works as a torchbearer for old school Finnish death metal. The driving energy and melodic focus keep it interesting, with just a touch of doom to help slow it down appropriately and add some more flavors to the mix.