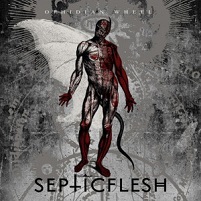 Ophidian Wheel is a curious time-capsule. After reaping widespread acclaim for 2011’s The Great Mass, Septicflesh have been re-releasing their early catalogue through Season of Mist and Ophidian… is the third disc to get the treatment. Originally released in 1997, it showcases a band in flux as they continued to fuse elements of black, goth, death and symphonic metal with more traditional melodies and big choruses.

The sound has been cleaned up some, providing more bite to the low end and clearer enunciation of the album’s signature melodies. The operatic vocals are spirited, but sporadically implemented and too far removed from the rest of the music on display, often interrupting the song instead of flowing with it. Track five “Tartarus” is a perfect example – 30 seconds of interesting melody is subsumed by three minutes of awkwardly placed chanting and vocal arias. Perhaps meant as atmospheric or a storytelling piece, it shows off Septicflesh’s ability to write compelling music scores, but is ultimately lost in the context of the album creating confusion rather than wonder.

“Phallic Litanies” features meaty riffs and spooky synths, but suffers from feeling stitched together. Melancholic grandeur swirls throughout, but abrupt changes to overtly operatic singing threaten to distract from some of Ophidian Wheel’s most memorable passages and jammable chrosues. Plodding repetitive drums throttle excellent tones and varied guitar passages on another almost-masterpiece, “Razor Blades of Guilt” whose moving instrumental second half reminds of Daylight Dies and is infinitely more interesting than anything Cradle of Filth or Dimmu Borgir were doing at the time.

Title track “The Ophidian Wheel” features riffs with similar impact and weight, making for crushing counterpoints to memorable melodies, but does not inspire repeated listens as well as the tracks mentioned above. A few alternate mixes of the album’s more successful songs round out the end, but don’t distract from the lackluster second half or make this a required purchase if you are familiar with the original. Ophidian Wheel shows promise that Septicflesh are very close to perfecting their formula but still occasionally stumble cramming in too many elements to really hone the experience they were going for.