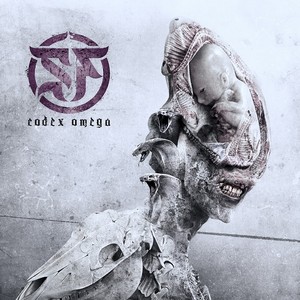 Ever since Septicflesh went at it for a second round back in 2007, they’ve been progressing their symphonic/orchestral aspects into a razorsharp blade. Something that couples with their death metal fury to create a fusion that’s equal parts beautiful and terrifying. As one of the genre’s flagbearers at this point, the bar is set pretty high at this point, but Codex Omega comes off as yet another shiny feather in their grotesque cap.

There’s plenty of bands doing the symphonic death metal thing, much in part due to the success of Septicflesh and Fleshgod Apocalypse, but Septicflesh do have an advantage that is distinctively theirs. That, of course, is how powerfully demonic they can sound. You can listen to songs like “Third Testament” and “Portrait of a Headless Man” and feel the sinister vibes that radiate a distinctly Septicflesh feel – a true merger of orchestra and metal. In fact, the integration of the symphony into their music is probably the strongest aspect of Codex Omega compared to its predecessors. It’s completely natural and never overwhelms the band’s metallic crunch. Yet it’s completely bombastic/towering and helps tracks like “Dante’s Inferno” and “Martyr” feel huge in scope, yet appropriately monstrous.

Some more melody does sneak in between the heavy chugs and blastbeats, none more so than the dark finale that is “Trinity,” where an acoustic opening lays the groundwork before mostly darkly melodic riffing kicks in. If there’s one thing holding the band back at this point, it’s actually the clean singing. Sotiris Vayenas’ love ‘em or hate ‘em croons just don’t have the same power and effect as Spiros Antoniou’s venomous barks. And three songs with them in a row (starting with “Dark Art”) knock a bit of the momentum out of Codex Omega’s sails. It’s an admittedly small knock, but its presence will definitely be felt by some.

Codex Omega is the strongest melding of orchestral elements into Septicflesh’s formula. At its best, it’s menacing, enthralling, and even awe-inspiring. Few bands can pull off a sound that’s this huge without compromise, and that’s why Septicflesh are one of the go-to bands of this ilk.