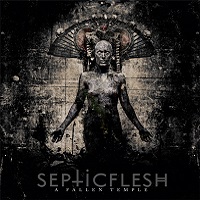 The Greek demigods of symphonic death metal have stormed through masterpiece records since 1991. With masses of material heaving in doom-like wrath and saturated in mellifluous symphonies, Septicflesh are worthy of having their names engraved in stone as legends.

A Fallen Temple thoroughly demonstrates all Septicflesh have undertaken and accomplished, but it’s curious why they chose to re-erect this album over the others. Then again, it’s clever to choose an album that is artistic as their other works, but perhaps not quite as popular. It would, to a degree, be redundant to re-release one that is already recognized as a crest of their preeminent collection. So Septicflesh returns to the long-sold out record from 1998, resurrecting it 16 years forward to 2014, fully restored and mended with extra surprises – three titles wrung from The Eldest Cosmonaut EP, also released in 1998; three versions of “The Eldest Cosmonaut,” the dark remix an amendment of darkened perfection; plus an extraordinary rare cover of Paradise Lost’s “The Last Time.”

All across A Fallen Temple, Septicflesh flaunt their symphonic charm to the highest degree such as in all three acts of “The Underworld,” wield their most leaden intensities in pieces like “Erubus,” and marvelously mingle their cyclone stylistics as in the sovereign “Brotherhood of the Fallen Knights.” The broad instrumentals play a vital role in directing the many moods of the album, but the vocals are keys to the song’s differentiating dispositions. While the wondrous soprano chants by Natalie Rassoulis escalates a dainty delicacy of many tracks, along with flutes, trumpets, and other instruments of the concerto, the elegant mélange also enhances the gracious sonority of bassist/album artist/harsh vocalist Spiros “Seth” Antoniou’s dooming bellows.

A Fallen Temple wheels around dazzlingly light to obscurely dark shades of symphonies and has a potent infiltration of operatic-angelic airs more so than in other albums such as Communion and even their last release, The Great Mass. Septicflesh have long been known for their infectious divisions of Gothic symphonic death metal, but like the overturned cross encompassed in their logo, they inverted the darkness of death metal with A Fallen Temple, but maintained the sickness.