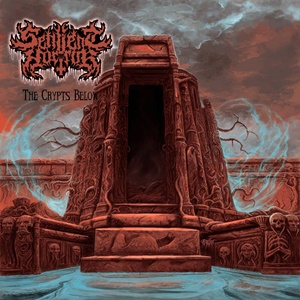 Two schools of approach to death metal these days – go balls out on the technical spectrum for maximum shock and awe factors or revert to the early days where the HM-2/ Sunlight Studio sound of Sweden ruled the roost. For Sentient Horror, the latter approach works just fine for them, thank you. Originating as Sentience in 2014 – this New Jersey quartet changed their name after an EP to Sentient Horror in 2016, and The Crypts Below represents their second EP following their Ungodly Forms full-length.

Those well-versed in the early 1990’s underground movement when many of the Swedish brigade signed those first record deals will know the influences well – mid-tempo to slightly faster riffs, gruff yet discernible growls, and that locked and loaded rhythm section to pound home all the tempos that keep the crowds alert and moving. Jon Lopez and Matt Moliti supplement their vicious low-end guitar crunch with the spirited, melodic leads that keep “Hatchet Crimes” top of mind in the way that Entombed and Edge of Sanity made their mark. The sinister cyclone blast moments and sick double-bass shuffle transition from Ryan Cardoza makes “Hell Marked” another highlight, including some ominous keyboard instrumentation to set up the next kinetic death combination. The production even has that nasty, raw propulsion – where you just get blown off your feet from the sonic output, and Matt’s vocals have that bitter, Dan Swanö-ish languish of despair aspect even through the deep bellows that occur in the opening title track. And choosing to end the recording on a cover, “Darkday” originally appeared on the third Edge of Sanity full-length – reminding the listeners of the melodic darkness and intensity of this well-regarded Swedish death metal troop.

Replicating a tried and true era of death metal may not be the wisest play to establish oneself in a market that can be prone to passing off old things as new – but in the case of Sentient Horror, it’s easy to get bowled over by the tenacity of the songwriting and their brilliant execution for these five tracks. 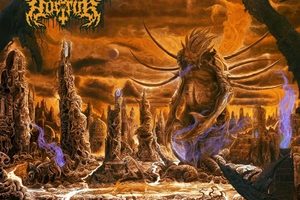