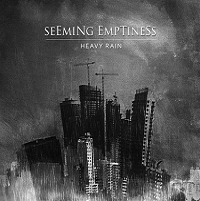 The push and pull over instrumental music generally brings forth the obvious question: Does a singer actually make the songs better? It’s a prescient question in some forms of metal, particularly when a growly mc-growlerson spoils the whole broth. (We’re referring to several forms of death and sludge, obviously.) Then there’s the Goth/dark spectrum of things, who almost always lives and dies by whoever is willing enough to take up the vocal spot. A singer of quality can almost single-handedly elevate an album/band, something Seeming Emptiness don’t seem to be too worried about on their self-titled, all-instrumental debut full-length.

The one-man product of Kevin M. from Schönheide, Germany, Seeming Emptiness has one previous effort to its credit, the 2015 Conversion EP. On their self-titled effort, Sir Kevin M. lines himself up with many of the riff and melodic ideas that made classic-era Katatonia, Novembre, October Tide, et al so enthralling. He certainly has the oh-so-crucial guitar laying aspect down, as found on “Retrogression.” But then again, a song like this is practically begging for vocals. In fact, a good chunk of them are. Kevin formats songs in a relatively conventional manner, eschewing the dynamic drop in and out template employed by some of instrumental metal/rock’s better bands (see: Long Distance Calling, Pelican, Russian Circles), leaving a handful of these cuts (see: “Riven” and “Red Glowing Night”) out to dry, if you will.

Even Kevin himself states in the band’s bio that “Lyrics are not required!” which yes, is true, but you’d be remiss not to ponder how his songs could otherwise benefit from them. Alas, that’s not the case, and Seeming Emptiness should find themselves on the outside looking in, even with the illustrious spate of influences hanging around.