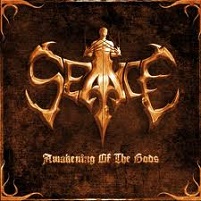 A reformation that is long overdue, Swedish death/thrashers Séance are best known for former rhythm guitarist Patrick, who is currently cutting his teeth in the Haunted and Witchery. Since we just mentioned Witchery, it’s important to note two members of the hardly active thrashers are in Séance: guitarists Rille Rimfalt (aka Richard Corpse) and Tony Vargfrost (aka Toxine), so inevitably, there is going to be some sonic spillover. For those ears, that’s a very good thing, as Awakening of the Gods is a riff du-jour, that is surprisingly punishing.

Like Witchery and old, old Haunted (like, circa 1998), Séance’s approach centers on the riff and the power it holds. Tight, punchy rhythms highlight “They,” where bruising chugs run roughshod over a short, but memorable composition. “Your Time Has Come” and “Invocation” sees Séance travel down more frenetic avenues, but with several killer riffs in tow.

The opening of “Flight of the Wicked” is a death metal nod to “Flight of the Bumblebee,” complete with acoustic triplets and serves as a brief intermission halfway through the album. The rollicking “Choose Your Eternity” highlightsAwakening of the Gods. An uptempo, vertical, death and roll number, “Choose Your Eternity” places Séance right in the tiny crevice between vintage thrash and the easy-going, hard-rocking Wolverine Blues-era of Entombed. Awesome.

As we just stated, Séance has somehow managed to fit in that small, relatively empty space between death and thrash metal. A true hybrid and totally worthwhile comeback, Awakening of the Gods was worth the 16-year wait, even if few were paying attention beforehand.