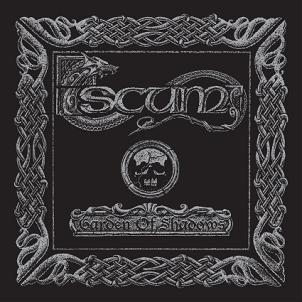 Old-timers, or those approaching such status remember the influence of Sweden’s Black Mark Production. Owned by Stig Börje Forsberg, the label at its peak housed Bathory, Edge of Sanity, Necrophobic, and Tad Morose, allowing it to run in stride with the then-exploding Century Media and Nuclear Blast. One such band buried on its roster was Finland’s Scum (not to be confused with the 15 other bands sharing the same moniker), who released two albums on Black Mark in the mid-’90s, only to have their proposed third album Garden of Shadows go ignored by the label. After some convincing from the savvy folks at Blood Music, Garden of Shadows is finally getting a proper release.

Quite a head-scratcher why Black Mark bypassed this album. We could point the massive overflow of death metal bands around 1995/1996, or Finland’s muddled place in the DM underground, but, no use in dwelling on something that didn’t happen 20 years ago. Garden of Shadows positions Scum as a sturdy, semi-melodic outfit, relying on those burly power chords and catchy arrangements that Convulse and Xysma also fancied. While such forceful riff ideas are in long supply, the Finns wisely temper such matters with easy melodies, as so found on album highlights “I Am Messiah” and “Black Swan.”

As perhaps a sign of Scum’s willingness to split from the death metal mire, the ten-minute “Trilogian Tales” is not terribly unlike one of their labelmates—the unequaled Edge of Sanity. Progressive and cunning, “Trilogian Tales” may have been a harbinger of what was to come from Scum. History cannot be reversed (the band apparently split after they couldn’t get the album out of limbo), but 20 years after the fact, the gents in Scum can rest assured they are no longer a Finnish death metal afterthought.