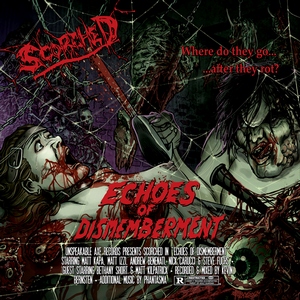 Most in the death metal realm use gore and horror-themed lyrics – its par for the course in aggressive music. But just by looking at the cover of Echoes of Dismemberment, you can tell that Scorched is having fun with it. Building a name for themselves with a some smaller releases (including a much lauded demo), it was time to bring things up to the next level – something Echoes of Dismemberment surely does.

While nods to bands such as Autopsy, Entombed, and Death, Scorched may show their influences but they don’t go so far as to simply replicate them. They do a good job of avoiding what many in the genre simply fall into and never feel like a cheap version of the above acts. Instead they let their songwriting chops do most of the work – whether zipping through faster tempos or lumbering along at near doom-ish rates, there are sizable melodies to be found. The band seems most at home with the mid-tempo, where the riffs earn the generic but fitting “crushing” tag (“Rot in Confinement”). Also adding to the sound is the subtle usage of some ‘80s inspired synths, which works quite well in regards to the horror themes that the cover makes use of, and provides a fitting mood for the tracks.

Echoes of Dismemberment may be Scorched’s first attempt at a full-length, but shows them as a rising player within the old school death metal scene. Using their influences as guides instead of templates and having just the right amount of melody to keep it interesting alone push them to the current forefront. As they continue to progress, expect Scorched to be one of the leaders. Echoes of Dismemberment has energy, killer riffs, and oozes potential. 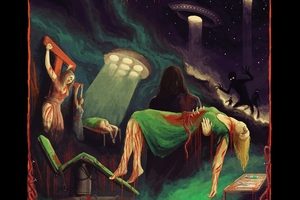