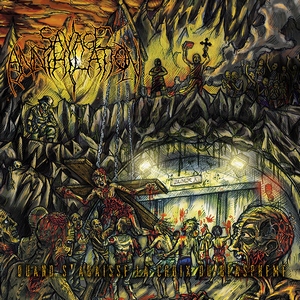 Always makes life a little easier going in when you can tell right away what the band is going for by their name alone. The name Savage Annihilation says it all – this French act isn’t going to beat around the bush when it comes to brutality (though it would be surprising if they did). Which is exactly what their second full-length delivers in spades.

Though evident from the first track that there’s going to be plenty of Morbid Angel and Immolation-isms to be heard, it doesn’t keep Savage Annihilation down. They have the old school, early ‘90s death metal thing down to a science and they have retooled things to work in their favor. For instance, the production is suitably grimy, but never gets in the way of the sometimes intricate guitarwork (even the vocals seem to sit at an effective level in the mix – not overbearing, but not lost either). The leads seem to shine brightest with the longer tracks, which can hit the 8-minute mark. There’s minimal ‘blurring’ due to the dynamics at hand – they can blast away, but it seems they’d rather bury you in riffage than overdo the extreme drumming. They can groove as well (see the title track), which aids in giving them some wiggle room.

Even if they aren’t redefining the genre, Quand s’abaisse la croix du blaspheme feels solid from beginning to end. They can keep the listener’s interest with the longer tracks without compromising their brutal vision, and that alone should peak the ears of all those in search of the next adrenaline rush.