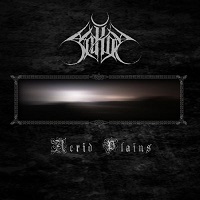 We’ll forego any silly metaphors in regards to Acrid Plains and how unbelievably awesome its opening title track is and how the rest of the album pales in comparison. Guess that’s what an opening track is for – to show off your best song and man, “Acrid Plains” is Saros’ best song, hands-down. A darkly-lit, spatially melodic concoction of post-BM and haunting, ominous guitar

lines, “Acrid Plains” set up the second album from these American metallers in a big way. Then the bottom dropped out.

The main beef with Acrid Plains is how far-reaching it is. It covers lots of terrain and some of it’s just not necessary, like the meandering female vocals that constitute a vast portion of the album. While it’s a great thing they resemble Hammers of Misfortune, this might not be Saros’ strong suit. Additional epic metal avenues are also explored, to varying degrees of success on “Devouring Conscience” and “Reversion.”

When the band keeps matters gritty and on-target (see: the title track, and “The Sky Will End Soon”), Acrid Plains emerges as a better-than-most dark metal affair, which might be the only suitable tag for a band as varied and multi-dimensional as this.

In this day and age where single songs

matter more than albums, there is some value with Acrid Plains. The killer momentum and suspense built by the opening track might find its way onto many iPod’s across the land and it should – the song

rules. Can’t stress that enough. As for the rest of the album, it’s give or take. Your call.