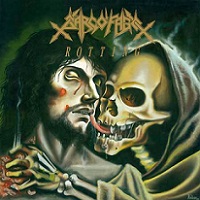 Ask any number of the Norwegian black metal veterans and they’ll all say the same thing: Brazil’s Sarcofago was a major influence. As arguably the most extreme band to originate from Brazil, Sarcofago were one of the first to pin down the proper “look,” with face paint, bullet belts, leather, etc. Coupled with a sound that was ahead of its time, the Brazilians made an indelible impression on Scandinavia. As is the case with most cult bands, they never got their just due, faring much better in the annals of unsung reverence. But, their 1989 Rotting EP is getting the reissue treatment, hopefully introducing it to a whole new flock of extreme ‘bangers.

Limited to six songs at above 30 minutes, Rotting provides a preview of where black and death metal was headed. Perhaps best put in the place of Show No Mercy-era Slayer and early Morbid Angel, the band’s propensity to blast and level the tempo was no doubt a shock to the system given the climate. The rabid, if not out of control “Alcoholic Coma” features barbed-wire guitar riffs and spit-spewing vocals, while the Bay Area-like “Tracy” contains some well-placed stop-start action. The title of “Sex, Drinks, and Metal” might be a hair misleading, as the song is bolstered by manic drum work and the over-the-top roar of vocalist Wagner.

Best approached when graced with an understanding of what was going on during that era, Rotting is fully capable of standing on its own two feet, well after its release. Very much a foundational album, crucial to the development of extreme metal, Rotting is simply worth a gander for those reasons alone. Ultimately, hard to fathom how things would have turned out if it weren’t for Sarcofago.