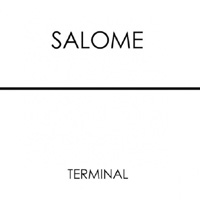 Fresh-faces are always welcome in the awfully-tired stoner doom or general doom scene (excuse Blistering’s lack of enthusiasm here), so leave it to a chick and two dudes to breathe some life into the scene’s lifeless corpse.Terminal is Salome’s second album, portraying at its core, a stripped-down, unabashedly raw form of doom that totally benefits from the harrowed screams of one Katherine Katz (also of Agoraphobic Nosebleed).

The interplay here is stellar, something only a three-piece could produce. Riffs usually crawl and lurch at normal doom tempos (read: slow, and slower), yet there is a freelancing quality to them that shows Salome aren’t all that inclined to sit back and light one up, like so many of their contemporaries are. Rather, Rob Moore’s guitar constructs and Aaron Deal’s backbone serve as the earthy foundation to Katz, whose downright ugly, how-dare-thee-wake-me-up-before 9:00 AM vocals are easily some of the most brutal the scene is ever going to hear.

With an album that is over an hour in length, Salome do fall into the trap of wallowing in its own experimentation, especially the 17-minute-plus noise/ambient piece “An Accident of History,” which should have been tacked on at the end of the album. Not to say there’s an issue with the other long songs here (the shortest is at six minutes), it’s just that a barely-there noise piece is a classic momentum killer, especially after the build-up and crescendo of “Master Failure” (check out the 4:15 mark for perhaps the album’s most pressing moment) and “Epidemic.”

Even the barely-there album cover suggests Salome isn’t your typical doom band, something that becomes increasingly obvious as Terminal wears on. Katz is an ace-in-the-hole, definitely, but let’s not forget about how crusty, granular, and interesting this album is, when it wants to be.