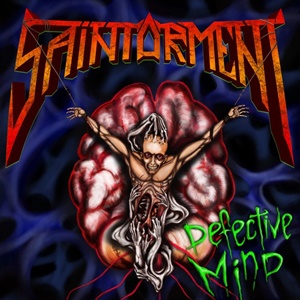 Developing out of cover band roots in 2013, Latvian thrash unit Saintorment recorded a debut album Well of Sins in 2015 and even transformed the Frank Sinatra Christmas standard “Let It Snow” into a quick two-minute metal arrangement last year (with sax solo supplementation). Now it’s time for the proper sophomore follow-up, usually where listeners should see supplemental growth and separation from influences in the hopes of establishing their own take on things. Defective Mind contains ten cuts steeped in traditional thrash and bash attitude, cultivating stomp and groove-like nuances that should send pit swirling energy to the hordes, but isn’t necessarily blazing new trails for those familiar to the party.

The Bay Area movement- especially the work of Exodus and Metallica – has a profound effect on the tight gallop-oriented riffing, rhythm/tempo transitions, and frantic yet melodic lead work Saintorment employ through this record. One listen to “Strong Enough” or “Zerofy” speaks volumes to the heads down approach employed, the raspy Romants Romanovss vocals complementary to the slice and dice musical proceedings. The instrumental “Mood Pyrexia” takes us on more of a diverse journey, expanding their thrash platform with power and classic/melodic flair, allowing for some spirited lead guitar breaks and interesting tempo twists from drummer Ed Jonhenkov. This scribe isn’t sure about the narrative count down aspects to comply for opener “Physical Force”, as it seemed a little corny to these ears – while dipping into Pantera territory for “We Are”, especially in the closing minute where the simplified chorus receives ad nauseam repetition to the point of screaming ‘enough already!’.

As a long-time lover of thrash and being there during its formative inception as an adolescent, there’s clearly a difference between original takes on the genre and those who follow the well-worn shoes of mentors. Saintorment still need a bit more seasoning for the former, as Defective Mind has that possible potential to separate itself from the pack, ultimately making for a fairly predictable, meat and potatoes outing.