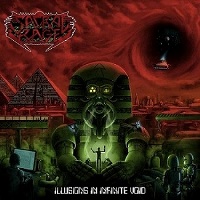 Greece is not a hot bed for speed/power metal bands, but that hasn’t stopped hungry upstarts Sacral Rage from releasing a quality debut full-length record with Illusions in Infinite Void. One look at the elaborate futuristic/space cover art calls to mind Crimson Glory, and while there are elements of Fates Warning and Nevermore in the progressive song structures, the main focus is ’80s power/thrash worship. Formed in Athens in 2011, the band released a two-song promotional demo in 2012 before releasing the 7-song EP, Deadly Bits of Iron Fragments, the following year. Where Fragments contained shorter songs and more of a straight-forward speed metal sound, Illusions sees the band growing and expanding its sound.

Following instrumental opener “Harbinger,” which sets the tone of the record with sci-fi sound effects and distorted guitar chords that create a dark Twilight Zone vibe, the album blasts off with “En Cima Del Mal,” featuring a speedy but meaty galloping riff, with haunting Annihilator undertones, from guitarist Marios P. and a Mark Osegueda meets James Rivera vocal delivery, complete with piercing falsetto screams from Dimitris K. While Dimitris mostly stays in the Rivera range, with hints of Warrel Dane at times (“Inner Sanctum Asylum”), Destruction’s Schmier (think “Alliance of Hellhoundz”) comes to mind on “Panic in Urals (Burning Skies),” a fret burner filled with up-tempo start/stop riffing from Marios and bassist Spyros and some shred-worthy soloing from Marios.

Dimitris’ vocal acrobatics are especially on display in “A Tyrannous Revolt” and the chorus of “Waltz in Madness,” in which he lets “Madness” ring out in that sharp falsetto that would make King Diamond proud. On “Inner Sanctum Asylum,” he uses more of a gritty growl in his voice but there’s a section in the middle of the song with layered falsetto screams before approaching an instrumental shred jam that is quickly reigned back in to the mid-paced to up-tempo riffing and pounding drums from Vagelis F. While Dimitris’ vocal talents are displayed throughout the album, instrumental “Into Mental East” allows the rest of the band to stretch out and showcase their chops. Starting with a sound byte that could have come from a Twilight Zone episode, snare drum hits and twisting guitar melodies introduce the catchy number, complete with a driving rhythm and a quick drum solo fill to finish it off.

If there’s a drawback to Illusions, it’s that many of the songs sound the same, utilizing similar riff patterns and always keeping the tempo at a constant fast pace. “En Cima Del Mal” seems to bleed right into “Lost Chapter E.: Sutratma.” That being said, when it comes to speed and thrash, breakneck riffs are not only expected but welcome. Sacral Rage may not be treading any new ground here, but what they’ve crafted in Illusions is a catchy, intense slab of ’80s power/thrash that is sure to please audiences when the band hits classic underground festivals this summer such as Germany’s Keep It True and Belgium’s Heavy Sound Festival, alongside the likes of Exciter, Riot V, The Rods, and Ostrogoth. Be sure to give them a listen! 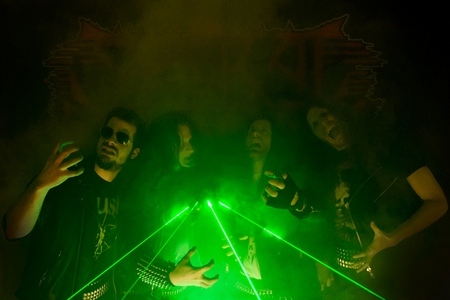