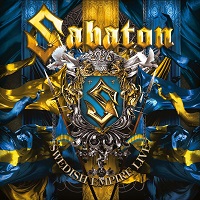 Metal could not be more desperate for a fresh batch of new headline acts. The eventual plight we’re going to face when our legends bow out is well-documented: There is a noticeable dearth of newer bands capable of filling large venues and taking top spot festival billing, and unfortunately, no one seems to be in too much of a hurry to figure it out, especially in America. But per the usual, our European friends are a step ahead, having groomed Sweden’s Sabaton to be the next bonafide headline act. Based on the rapturous response received across their Swedish Empire Live DVD, they’re practically there already.

Comprised of two discs (a live DVD consisting of a big-ass show in Poland, along with three separate gigs in Europe, and a CD that replicates the Poland show), Swedish Empire Live’s bread and butter is the aforementioned live set shot in Woodstock, Poland. The band – welcomed as heroes – receive the sort of response generally reserved for the Iron Maidens and Blind Guardians of the world. Mass sing-a-longs, chanting, and spirited participation attach themselves to virtually every song in the set. This is where the band’s thematic, thick-on-drama songs work best, as cuts like “Ghost Division,” “Gott Mit Uns” and the excellent “Art of War” engage the Polish throng as if they were veritable classics.

Bonus/backstage footage might be a tad thin, but the enormous nature of the Woodstock live set is probably what Sabaton is leaning on in order to show the rest of the world how big they’ve become. And while the band has ways to go in America to make any kind of dent (one would think they’ll probably never be bigger than what they are now, actually), in Europe, they are greeted as kings. ‘Tis is a good thing. We need more bands like Sabaton.