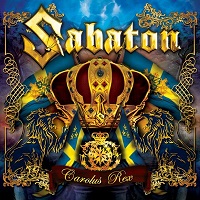 Not sure if losing 4/6’s of your lineup is the way to go prior to an album’s release, but hey, hats off to Sabaton for circling the wagons and getting back up to speed in such a short amount of time. Carolus Rex will go down as the last studio album with the band’s breakthrough lineup, and like their other bodies of work, it’s highly thematic and regal-sounding power metal. And for once, the Swedes appear to have whipped up some songs fitting of their over-the-top presentation.

A concept album based on Gustav II aka, “The Lion of the North,” who ruled Sweden from 1611 to 1632 and was largely responsible for creating the Swedish empire. There’s several layers to this story, including various battles, invasions, persecution, and eventual defeat at the hand of the Russians in the 15th century…you know, typical concept material for a metal album. Yet, it’s cool to get a hold of an album that tackles Swedish lore. The whole Viking treatment has been beaten to death.

It’s not much of a surprise that a lot of these songs brandish the sort of epic and/or Hollywood sword that isn’t terribly dissimilar to labelmates Rhapsody of Fire, save for the fact that Sabaton is infinitely less technical. And that’s probably why some of these songs sit rather well, including the surging opener “The Lion From the North,” a song that is a safe bet to open the band’s shows for the next few years, while “A Lifetime of War” thrusts singer Joakim Brodén into the spotlight, showcasing his thick, muscular vocal tone.

Quick, lively jams like “1648,” and “Killing Ground” are where the real action is with Sabaton, for they practically prevent the band from over-thinking things. Such is not the case for the overbearing “The Carolean’s Prayer” and “Long Live the King,” both of which wash-out with drab riffs and generic orchestral arrangements. Disregarding those two songs, Carolus Rex might be the first album where Sabaton makes themselves sound larger than life.

Thanks to their grueling tour schedule and love from the festival crowd, Sabaton’s gradual upswing should be aided by Carolus Rex. While there’s nothing the band does that would rank as remarkable, they’ve managed to weave in a fascinating storyline into their sub-power metal package. And of course, we can’t forget about the camo. Matching band outfits rule.