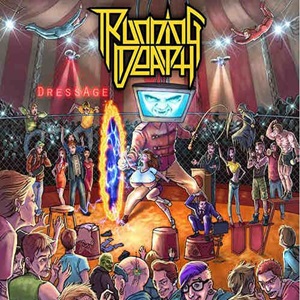 After a few false starts, break ups, and reunions, German band Running Death seem to be on a productive upswing. With a demo, two EP’s and debut album Overdrive under their belt since 2007, the follow up DressAge comes out two years after their first full-length. Thrash being all the rage once again, it’s hard to differentiate between musicians who rape and pillage the discographies of the originators and those aiming to set the bar slightly higher creatively. Place Running Death in that latter assessment, as these ten tracks may have 80’s-like energy, just brimming with extra swing and varied finesse for an interesting ride.

Sick, twisted semi-technical thrash metal is the order of the day- with the added benefit of melodic hooks throughout especially on the musical side of the spectrum. When the trio choose to flex their knowledge and powerful skill sets, you get a spirited instrumental for “Anthem of Madness” that includes everything from progressive, flange bass play and main riffs/ guitar harmonies that rival a doubled Jeff Waters in their early 90’s Annihilator prime. Guitarist Simon Bihlmayer does double duty on the microphone, and his delivery can be quite intriguing or slightly irritating depending on where you are on the album. Early out his pirate-esque wail for “Courageous Minds” sounds as if Dave Mustaine took a ride on the Peavy/Rage express, while the slower, reflective “Safety Second” has clean work during the verses that appear to be more Lake of Tears/Tiamat oriented. When listening to the snare tones and guitar attack throughout, you get the feeling that Running Death possess appreciation for Megadeth on the Peace Sells and So Far period of their career – the chemistry and shifty rhythm template fairly advanced to keep the listener anticipating the next move.

Drum solo spotlights for “Delusive Silence”, background sing-a-long ‘woahs’ during the sea-faring atmospheric “Beneath the Surface” – DressAge isn’t necessarily going to be impressive from an accelerated speed perspective. Instead, this album’s longevity comes through in those open spaces where interplay, progressive execution, and proper construction of ideas matter.