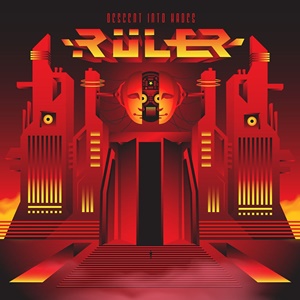 Starting in 2009 with a plan to combine a love of pure European and British heavy metal, Italian quartet Ruler set about writing and recording material. They’ve released two full-length records to date in Evil Nightmares and Rise to Power, plus graced prominent festivals like Up the Hammers (Greece), Brofest (UK) and Headbangers Open Air (Germany) to name just a few. There’s been a six-year break between albums, as they gained a new drummer in 2015 with Steve Bianco and decided to get some live gigs under their belt before stepping in the studio for Descent into Hades. Let’s just say that it’s been time well spent, as this is a high-octane effort for those who love catchy heavy metal with progressive movements, circling back to a strong love affair with Iron Maiden and their offspring.

It’s hard not to be enraptured by the helium high voice of Daniele Francesco Valentini. This scribe almost had to look back twice to check if this was a male, as the man’s upper falsetto propensities and rich, vibrant tone have as much of a feminine mystique as it does Dickinson/Kiske when you peer into “Queen of Danger” or the galloping anthem “Prisoners of Hell”. The gang background vocal supplementation during some of the tracks gives away their Italian heritage, especially in terms of some tougher English pronunciations – but it’s hard to fault the blazing musicianship on all fronts, as the guitars, bass, and drums unite in this 80’s cavalcade of traditional heavy / power chords and shifting tempos. From the opening drum salvo to start “Black Hand” to the moody acoustic serenity during “Airstrip 1” that transforms into this melodic buildup / arpeggio marching refrain in the longer instrumental sequence, it’s clear these musicians know their Maiden-esque twists and proper turns, influenced by the Di’Anno and Dickinson discographies. Bassist Mirko Negrino delivers some funky lines during the more commercial sounding “Melanie” – and it’s through this song where you hear a bit of those German qualities in terms of phrasing and guitar finesse for Matt Baldoni. At eight songs and under 45 minutes, Ruler deliver the proper musical information to consume and process, headbang and fist wave, without feeling ear fatigue or brain exhaustion.

Taking into account the band’s obvious penchant for Maiden swings and European sophistication, there’s nothing about Descent into Hades that won’t appease the heavy metal faithful.