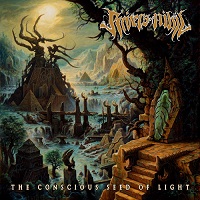 ] No doubt about it, Pennsylvania’s Rivers of Nihil are technically proficient musicians who have chops for days and show occasional hints of greatness on their full-length debut, The Conscious Seed of Light. Unfortunately, though, those moments are few and far between, instead giving way to repetitious and at times interchangeable structures that leave many songs unmemorable.

The record starts off strong with the mournful, atmospheric instrumental “Terrestria I: Thaw” leading into the bruising “Rain Eater,” which continues the melancholy tone of the opener while adding more typical death metal riffage and some Meshuggah-ish eighth-string bass drops. The predominantly mid-tempo number “Soil & Seed” stands out as a particularly crushing piece, mixing brooding minor-key picking with a Bloodbath kind of stomp before traversing into black metal riffing territory. Trippy album closer “Airless” also shines, showcasing more traditional song structure than the rest of the album and giving each passage a little more breathing room than is typical. To emphasize just how subversive this track is, the guitar solo near the end is played over…major chords [gasp].

Aside from these standout tracks and some exemplary playing ability, the rest of the album falls into the same trend as many newer death metal bands: packing as many riffs, tempo changes, and general weirdness into each song as possible, making each piece more akin to abstract art than intelligible songs. Certainly this type of songwriting has its place, and some bands, like The Faceless, can make it work for them. Ultimately, though, the repeated chaos riffing that permeates this album ultimately costs many songs their individual identities. And while these songs may still contain occasionally interesting bits (“Mechanical Trees” boasts a short but beautiful solo near the end, while “A Fertile Altar” offers an authentic face melter), they’re generally overshadowed. Even the eight-string Meshuggah drops wear thin after being used in six or so consecutive songs.

In all, Rivers of Nihil show great promise and certainly have the talent to make a name for themselves if they focus more on unique songwriting; some songs from this record would even serve as great blueprints. The majority, though, are largely forgettable.