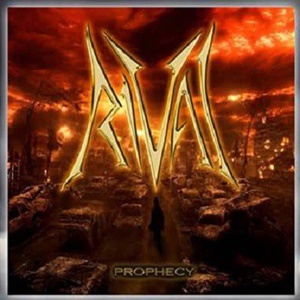 Together since the 1990’s, Chicago’s Rival came onto this scribe’s aural radar through a self-released album in 2000 called Modern World – as well as a riveting performance at the initial Classic Metal Festival the following year in Kalamazoo, Michigan. Signing to the European division of Metal Blade for the follow up State of Mind released in 2004, they’ve had a rather low profile ever since. Keeping the same lineup as those heydays, Prophecy proves the quartet’s penchant for heavy/power metal from the old school platform still remains strong this long into their career.

The foundation of Rival starts with the galloping nature of riffs from Neven Trivic and Chuck McNulty that can be speedy or semi-thrash oriented one minute, then spin into a power/traditional scope depending on the flow of the arrangement. Their complimentary activities and attention to specific hooks/melodies make the Omen-esque title track and Brainstorm-like follow-up “Paralyzed” two cuts that click immediately, especially due to proper songwriting mechanics and equally enticing lead breaks. Bassist John Johnson doesn’t sit in the shadows, pumping up the Maiden-esque “Blind Fury” through his fleet of fingers fret activities, going hand in hand with the solid drum work of Gary Olson. John also holds down the vocal duties, and he has a gritty posture to his clean delivery for “Retaliation” and “About You” that puts him in a similar category as the much-missed J.D. Kimball of Omen during those critical 80’s years when Battle Cry, Warning of Danger, and The Curse put them on the international map. The eight songs benefit from a lean and focused plan of attack – averaging out around four-minutes and change, explosive enough to get the point across and then move onto the next power number.

Prophecy will probably gain more praise and fan support from countries like Germany, Greece, and the Far East over their homeland – and that’s a shame. There’s something to be said for impeccable timing, stirring songwriting, and mandatory headbanging each and every time these tracks blast out of your speakers. Let’s hope that it doesn’t take another decade for the next Rival album to drop – but Prophecy brings back that Modern World energy and atmosphere enough to hopefully appease most power/heavy metal hunters.