Revolution Within – Straight from Within (Rastilho Records) 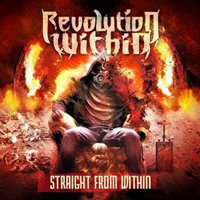 “Hate” is such a blasé term in metal. You’re angry – we get it. Bands that are transparent with such feelings are usually the ones who are largely forgettable, much like when Metallica thought they could still demonstrate some angst by way of “Wasting My Hate” on Load. Yeah, that was a real angry song.It’s hard to be angry when you’re parading around in silk shirts for a fashion shoot (like Metallica) and wearing eyeliner (like Metallica), and cutting your hair (like Metallica). Is this review about Metallica? ‘

Coming right down the pike with some serious spite and uh, hate, comes Brazil’s Revolution Within. Playing a mish-mash of death/thrash that recalls our Euro friends in Dew-Scented and Hatesphere, Revolution Within present 11 songs that are as nimble as they are ready to be moshed to, which by today’s standards, earns them some gold stars or smiley, happy faces. Better yet, there’s no tip-toeing the line of generic thrash of the retro variety – Straight from Within is how modern thrash metal should be played.

Thanks to a streamlined production job that befits the band’s technical savvy,Straight from Within employs a battery of angular riffs that recall the aforementioned Hatesphere and their excellent Bloodred Hatred album. The regular back-and-forth between speedy and groove-laden segments have lasting appeal, especially on opener “Pure Hate,” and “Pull the Trigger,” which goes from breakneck thrash to merry-go-round circle pit action in no time. Down the line, the riff cartwheeling on “Only the Strong Will Survive” and standout cut “Unleash the Anger” cuts in line between the Haunted’s marvelous self-titled debut and Made Me Do It, tossing in knifing guitar solos and tempo shifts galore.

Certain to be a force in the Third World thrash metal scene for years to come, Revolution Within’s grapple on modern, European-sounding thrash is commendable. In fact, Straight from Within easily takes out Dew-Scented’s recent Icarus and in time, could nip at the heels of thrash’s big players.