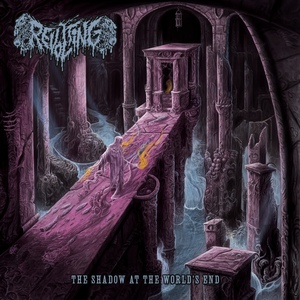 Old school Swedish death metal. Rogga Johansson. Does anything else really need to be said? Truth be told, it’s a valid description for followers of the genre at this point. Revolting delivers exactly what you initially believe that you are going to get. As Revolting is one of his more longstanding acts, there may not be much surprise in the way of The Shadow at the World’s End, but that doesn’t mean it lacks for charm.

With much of what Johanssson does, it’s all about the riffs and melodies. To that end, the latest from Revolting really does bring home all of the goods. Many of the tracks are at a breakneck pace and do their best to simply grind the listener down into paste. The title track hits hard in this avenue, with thrashing, urgent riffs that almost force you to start banging your head around. But some melodic slowdown is also key, and the ending of the track does a nice job of balancing the two ends. While galloping and energetic riffs are pretty much the norm here, “Daggers that Mimic Life’s Pain” is a nice groovy little number midway through that works as a slight break from the adrenaline rush that surrounds it. That said, the frantic tempos really do suit this material quite well, and way Revolting flips in some melodic touches to each track (“To the Bitter Bleeding End” as a fine piece of evidence) means that return listens are inevitable as the subtle melodies begin to bore their way into your skull.

As prolific as Johansson is as a songwriter, one would think that the shtick would get old, but The Shadow at the World’s End is proof positive that it really doesn’t. Revolting brings forth high-energy death metal dipped in feverish melodies that should make genre fans smile with murderous glee. 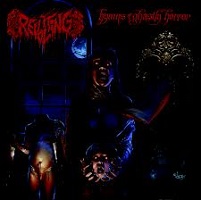