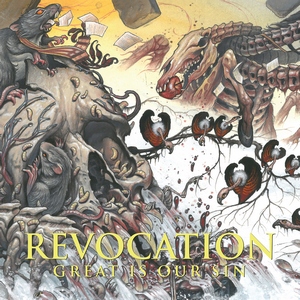 Usually when one hears about Revocation, things come up about the band’s consistency or the way they blend their technical chops with actual songwriting in a way that blends heaviness with some actual fun. After the galloping and fun thrashy-ness of the self-titled and prior releases, the band’s Metal Blade debut Deathless dove more into, well death metal. While it was a good release, it seemed to be missing a little something extra though. Great Is Our Sin brings back that extra and more.

While continuing the heavier, deathly path that Deathless wrought, Great Is Our Sin does swing things back in the other direction, melodically-speaking. But the band’s unique blend of the extreme (a real tough call to label these guys as one thing or another, and that’s a great thing) is firmly intact. Revocation simply tosses in more bore-into-your-skull riffs in each track than most bands manage to find in a lifetime. Take “Communion,” overflowing with all of its thrashy goodness and playful guitarwork – one of the band’s strongest songs in a while. So enamored with the instrumental “The Exaltation” was this scribe that it took several listens to realize that it was in fact, an instrumental. Plus the variety that they pull off within the parameters is equally noteworthy. Opener “Arbiters of the Apocalypse” swoops in with super melodic soloing and an almost arena-rock vibe at points. “Crumbling Imperium” really brings the heavy, with some of the nastiest and aggressive sounding riffs on the album. But “Profanum Vulgus” merges the two, with relentless and thrashy/deathly riffs being countered by slick melodic leads and later clean vocals. The last song, “Cleaving Giants of Ice” is as epic as its title implies, working with triumphant melodies from start to finish – sure to leave the listener with a wide smile on their face.

Few bands can wield dizzying technical displays to the lengths that Revocation does and turn them into strikingly catchy songs. With more time and exposure to it, Great Is Our Sin might very well prove to be Revocation’s strongest release to date. Considering some of their previous achievements, that is an accomplishment in and of itself.