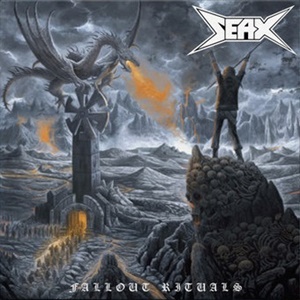 Consistently embracing an unadulterated enthusiasm for raw speed metal that has traditional and punk inflections, Seax maintain a workhorse, blue-collar aspect to their memorable live performances and studio output. Shadow Kingdom Records sign the band on their fourth full-length Fallout Rituals, clearly making modest inroads in the underground and rightfully so. Former guitarist Eli Firicano still handles the recording/mixing duties, adhering to a primal, lively 80’s-oriented sound and tones that will take many listeners back to that era – where lines blurred all in the name of pounding, screaming, and elevating daily frustrations or monumental worries into something much more comfortable and tolerable through each successive playback.

The tandem rhythms and quick hitting lead breaks from guitarists Hel and Razzle revel in relentless energy and charging chaos – the type for “Rituals” and “Legions Arise” that put acts such as Agent Steel, Exciter, and Razor on the global map. Unison gang vocals percolate frequently in key chorus moments, sure to elevate the retention factor of “Killed by Speed” and the Accept-like “Interceptor” to future setlist favorites (the added Teutonic-melodic runs a bonus touch). Drummer Derek Jay slams his snare and kick activities with go for broke fills that charge like the running of the bulls – at times he calms to a mid-tempo reprieve, only to ramp things up to the highest gear as the speed riffs fly by just as personal favorite “Bring Down the Beast” showcases. And there is the one of a kind, maniacal vocal delivery that is Carmine Blades. There’s no questioning the man’s commitment to the metal cause – he can hit piercing, bird call notes and hold out screams quite unlike most in the business. He’s learned when to go as fast as the riff parade calls for, John Cyriis-ish for “Winds of Atomic Death”, but also adding in a bit of thrash and Rob Halford-ish charm when necessary. By the time the concluding anthem “Born to Live Fast” whirls by with its call to arms opening instrumental sequence, another patented Carmine scream signaling the punk/speed metal madness along with guest vocals from PanzerBastard singer Keith Bennett will have you racing for another return engagement.

The consistency of Seax does not go unnoticed – their live shows always memorable and now gaining acclaim on many sides of the globe for their speed metal style. Fallout Rituals could indeed be the band’s pinnacle achievement – hammer down and discovery why yourselves. – Matt Coe

Formed in 2009 in Worcester, Mass., speed metal maniacs Seax took their time finding the right lineup combination to record and release debut album “High on Metal” in 2012, but since then the band has been burning up more than its fretboards on a relentless pace conquering the underground and churning out more blitzkrieg salvos with “To the Grave” in 2014 and the excellent “Speed Metal Mania” in 2016, all the while honing its potent speed metal attack. Following the quintet’s first foray to European shores last summer, which culminated with a performance at the Headbangers Open Air in Germany, the band signed with Shadow Kingdom Records for its fourth full-length album, “Fallout Rituals.” Without a doubt, this is the band’s most accomplished release to date, brimming with razor-sharp riffs, scorching solos, thundering drums, ear-piercing screams and plenty of gang vocals for sing-along action.

While “Fallout Rituals” is not a concept album per se, there is a consistent post-apocalyptic, end of the world theme permeating the album, first introduced with “Rituals,” which follows the ominous instrumental intro “Fallout.” With its slashing buzz-saw riffs and hammering drums, “Rituals” is an absolute burner of a song that really showcases vocalist Carmine Blades’ ability to unleash banshee-like screams, used to great effect throughout the remainder of the album. The extremely catchy “Killed by Speed” follows, keeping intact the break-neck pace set on “Rituals.” An ode to forbears such as Exciter and Razor as much as contemporaries Vulture and Stalker, “Killed by Speed” is a celebration of all things fast n’ loud, as Blades screams “Violence and force, long live the loud” and “Victim to the blade, shadow of the sword” in between the gang-shouted “Speed metal thunder, heavy metal sound” chorus. A live staple, this one is sure to send the throngs into mosh madness.

The ability to write catchy, yet fast and heavy songs is a hallmark of the band. And while heralding heavy metal has always been central to any Seax album, the band expands not only its sound but also the lyrical content on this album, as “Bring Down the Beast” is based on the dragon-slaying movie “Reign of Fire.” The velocity stays up-tempo and in your face, as the song provides more sing-along opportunities with another gang-shouted chorus, yet another consistent aspect of the album. “Feed the Reaper” and “Interceptor” allow guitarists Hel and Razzle to continue to pummel the listener into submission with 10-ton hammering riffs, tempered with tasty melodic flourishes that add to the catchiness of the songs and fiery fretwork in the solo tradeoffs, as Derek Jay provides steady blasts and crashing cymbal work, further amplifying the slam of the riffs.

Although “Winds of Atomic Death” and “Legions Arise” offer more of the same, from the neck-wrecking riff onslaught and infectious melodies to Blades’ high-pitched wails, there’s something about these songs that makes them stand out. They are just as lethal as anything found on the first half of the album, which wraps up with “Riders of the Old World” and “Born to Live Fast,” the latter resembling more of a punk/crossover affair, with guest vocals provided by Keith Bennet of Panzerbastard. Rounding out the guest performances is Nicholas Izzo of Ravage and Iron Will, who handled bass duties admirably on the album, adding a pounding low-end presence to the speed metal proceedings.

Just as the band has upped the ante in the songwriting department on “Fallout Rituals,” so too has it raised the bar with the album artwork. A departure from the band’s usual black-and-white covers, artist Juanjo Castellano created the colorful post-apocalyptic scene that features several nods to songs on the album, such as the dragon from “Bring Down the Beast.”

“Speed Metal Mania” may have established Seax as a force to be reckoned with in the underground scene, but “Fallout Rituals” shows the band is more than ready, willing and able to take things to the next level. Beyond the speed and aggression, the band’s well-crafted songs have staying power due to the memorable melodies and sing-along, gang-shouted choruses that ensure plenty of crowd participation and returns for repeat listens. Beware the blade of Seax! – Matt Bower 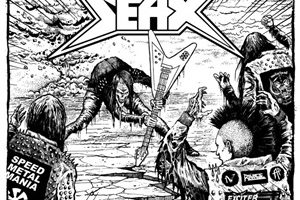