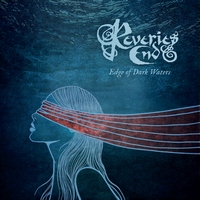 Finland’s metal scene is no stranger to melancholy. One can quickly rattle off an easy dozen bands that fit the bill, from death metal to black metal to progressive. Finnish upstarts Reveries End easily fit the bill when it comes to the somber and morose in their music as well, this time in the form of something more gothic and doomy in nature.

If you could imagine a band like Katatonia or Ghost Brigade taking their depressive riff structures and moving it in a more gothic direction, you can start to see where Reveries End is heading on Edge of Dark Waters. The influences are notable in the quieter moments of the album, like in parts the title track and “Descent.” One thing sure to set Reveries apart from those influences are their vocalist Sariina Tani. Her soothing clean vocals are part of what brings the band in a more gothic direction, bringing some impressive emotion and power to cuts like “Hamartia” and “Tomorrow’s Fool.” But the band isn’t afraid to ramp up the heaviness from time to time either, with more ominous tones infiltrating tracks like “Scales of Night” sometime more upbeat tempos in “Unwind.” To this point, Tani’s vocals shift into more blackened rasps, adding some intensity as well.

There’s plenty of diversity in Reveries End’s repertoire, bringing in gothic and doomy heaviness alongside some occasional forays into the progressive. It’s all handled with the grace and skill of a much more veteran act. Unfortunately, Tani has since left the band following the recording of this album, so hopefully the band can find an apt replacement. In the meantime, Edge of Dark Waters is worth seeking out for those looking for some depressive yet ear-pleasing gothic/doom.