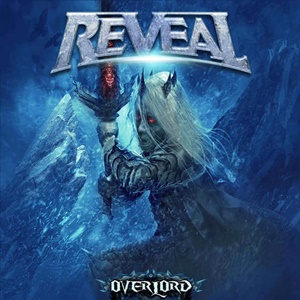 Power metal has this ability to energize and transport the listener into a fantasy world – past and future aligning in imagination, where wizards and warriors unite to conquer evil. Spain act Reveal are a sextet developing from Darksun guitarist Tino Hevia and fellow lead axe player David Figuer – rounding out their lineup with veterans of the Spanish metal scene plus Swedish singer Rob Lundgren. Overlord is the group’s second album, following up 2017’s Timeline – and first for latest label Wormholedeath. While there are many different styles of ‘power’ metal, it’s apparent throughout these eleven tracks that Reveal sit in more of a traditional European heavy stance, not necessarily throwing down shredding antics or cheesy melodies but infusing their riffs and songwriting with Teutonic-laden harmonies that bring early Rage or Blind Guardian to mind.

The band use keyboardist Elena Pinto in more of an atmospheric or embellishment role rather than dominating the proceedings – you’ll assuredly enjoy the twin guitar rhythms and harmony accents, even as the funeral-like organ spots pop up for highlight “The Crussaders”. More often than not, the rhythm section parts shift from up-tempo double kick activities into a comfortable, mid-tempo metal template – leaving plenty of room for melodies and hooks to cement themselves easily into your body as “Path of Sorrow” and opener “The Name of Ra” showcase. A prominent bass underpinning takes center stage on “Remember My Words”, while acoustic guitars and piano interplay puts the ballad “My Pain” into more of a left field mid-album twister, allowing Rob to use more of his gritty, emotional edge to his delivery. As a vocalist, he probably will not be considered an upper tier singer a la Michael Kiske or Fabio Lione – his preferences more in a mid-range to slightly upper register, clean and clear as a mix between say Kissin’ Dynamite or latter day Nocturnal Rites, as “Metal Skin” best showcases the versatility.

Prepare for a very natural production which isn’t typical of a power/heavy metal record in 2019 – meaning you can hear a natural snare snap, limited triggering, and guitar tones that aren’t overly processed and sent through reamp measures. Overlord delights the early 90’s heavy metal/power fans, and if names like Rage, Blind Guardian, and Primal Fear mean something to your collection, Reveal won’t disappoint.